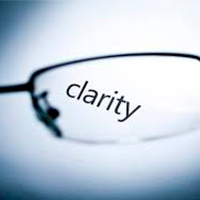 A Key to Achieving More Clarity and Peace of Mind in Your Business (and all of your life)!

I have just finished seeing a new client.  It was our first official session together and he came wanting to work on how to get clarity on which direction to take concerning his business.

He is going to live in a new area which means, since he has an in-person teaching academy, he will need to start from scratch in building up a new clientele.  His dilemma was whether he actually wants to do this at all.

He said he wasn’t sure whether to do what he loves, what fills him up (though he hadn’t much idea of what that was anyway) or whether to allow his current or new business venture to fill him up.

This is where I saw how helpful it would be if he understood where his feelings come from.  If he believes that the outside world, in this case his business venture, could make him feel anything at all, he is innocently looking in the wrong direction.

What do I mean by that?

I mean he believed that the good feeling he was looking for could come from his business.  I explained to him that it works one way – from the inside-out.  There is only one place that our feelings come from 100% of the time and that is from within.  It can never come from the outside as in circumstances or people.

Every feeling we have is attached to a thought.  They are two sides of the same coin and totally inseparable.

When he walked into the session and said he just didn’t know what to do and that he was feeling confused, I was really clear on where that feeling was coming from – his thinking in the moment.  He didn’t know that at the time and so he was feeling uptight and a bit anxious.

By the end of the session, he still didn’t know what he was going to do because we hadn’t addressed that issue at all, but he felt very differently.  He said he felt a peace inside.

So how can the same thoughts of confusion and “not knowing” result in a different feeling?

Through understanding.  Or to put it a different way, by realizing there is a misunderstanding going on.

Once he realized where his feelings were coming from, he visibly relaxed and started smiling.  He started to talk to me about how it was as if we are watching a movie on the television and believing it to be real.

He was seeing the truth of how we are always living in the feeling of our thinking  and NOT our circumstances.  He could see that the movie in his head was not real and he didn’t have to get drawn in.

The result was that he left in a feeling of peace and happiness.

From that space of peace and clarity he will automatically see far more possibilities for his business and life than when he was uptight and anxious.  It’s as if he has just gone up in an elevator from the basement where hardly anything was visible, to the penthouse where the visibility is unlimited.